Italian historical town near Siena in Tuscany. It is part of the valley of Elsa river. Located about 35 kilometres (22 miles), North of Siena, known as the “Town of Fine Towers”, San Gimignano is famous for its medieval architecture, unique in the preservation of sixteen towers surrounded by walls that form “an unforgettable skyline”. The Historic Centre of San Gimignano is a UNESCO world heritage. The town is also known for the wine “Vernaccia di San Gimignano” produced from the ancient variety of Vernaccia grapes which is grown on the sandstone hillsides of the area. Main sights: the Palazzo Comunale, the Collegiate Church and Church of Saint Agostino containing frescos, dated back to the 14th and 15th century.
Source: Wikipedia 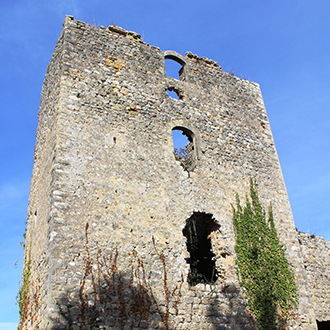 LOCATION: in an isolated position on the summit of a hill near from Il Caggio. It can be reached by proceeding along a deviation on the right of the road that goes from San Gimignano to Volterra, passing through Castelsangimignano.
HISTORICAL SIGNIFICANCE: Pope Lucio II in 1144 decided that “Castrum Vetus” (old castle), or Castelvecchio, had to be under the control of the Bishop of Volterra.
The Bishop himself, Ildebrando de’ Pannocchieschi, ceded the property in 1210 to the Municipality of San Gimignano, and as a result Castelvecchio became the battleground of many wars between San Gimignano and Volterra.
When it ceased to be used for military purposes, Castelvecchio was abandoned by its citizens and declared a plague area in 1485.
The local church was still existed in the 19th century, but the impenetrable woods overgrew everything until some twenty years ago when a group of voluntary workers decided to clean up the site.
DESCRIPTION: thanks to the work of volunteers, many of the ruins of Castelvecchio have miraculously emerged from the woods, like the surrounding walls, the church, the bastions and the main buildings. This work continues in spite of many difficulties. 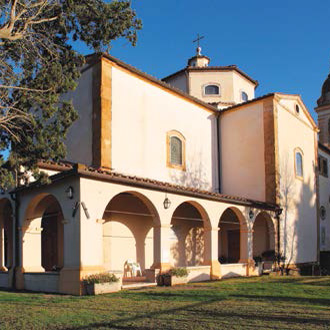 LOCATION: in the middle of a group of buildings which form part of the village of Pancole on a local road at about 4 Km. from San Gimignano.
HISTORICAL SIGNIFICANCE: on the 2nd May 1668 a marble altar table was discovered in the middle of an oak forest, by a mute child who miraculously acquired the ability to speak. By popular desire, a sanctuary was built on the spot and consecrated on 14th September, 1727.
The sanctuary was severely damaged during the Second World War, but later rebuilt by popular consensus.
DESCRIPTION: the building, with a latin cross plan, has a central cupola, surrounded by a portico. Internally, a picture of the Madonna with Child, found in the forest mentioned above, has been placed above the high altar. 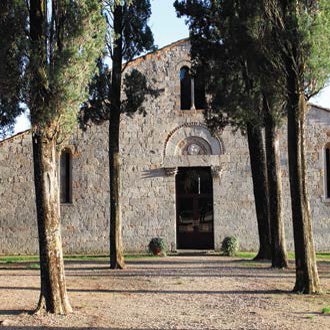 LOCATION: in a dominant position on the right of the road linking San Gimignano to Gambassi Terme and Montaione, passing through Camporbiano.
HISTORICAL SIGNIFICANCE: the church dates back to the 11th century, according to records referring to Cellole, where, in 1150, a church was built with a single nave and about fifteen metres in length. It was enlarged in 1233 to its present size. It was declared a national monument in 19th century, then it collapsed for unknown reasons so it was restored with modifications of the facade and the apse.
DESCRIPTION: the church is a Romanesque structure, built carefully in aligned squared stones. The facade is simple and harmonious with a central characteristic door with two lateral pilasters and a capitol of different size, dominated by a stone arch which and a mullioned window. Internally there are three naves with a central apse, enriched externally by blind arches. 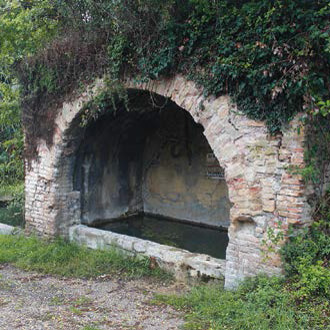 LOCATION: in an isolated position, on a short deviation, on the right of the road which goes from San Gimignano to Volterra, passing through San Donato and Castelsangimignano.
HISTORICAL SIGNIFICANCE: around a living spring, a factory mill was built which dates from time immemorial and was transformed over the centuries and finally took on its present shape in the XVIII or XIX century.
Il Guazzatoio was probably also used for washing and dyeing material as well as supplying water to man and beast.
DESCRIPTION: a factory constructed in brick with a central core, characterised by a large rounded arch, and with two external basins. Worth noting is a coat of arms (upside down), can be seen on the left external wall. LOCATION: on the top of a hill and at the end of a path, which, after a couple of deviations, lead to an important road which goes from San Gimignano to Gambassi Terme and Montaione, passing through Camporbiano.
HISTORICAL SIGNIFICANCE: the Citerna's castle was destroyed during a war in 1230 and was rebuilt by the city of San Gimignano and then transformed into a villa and used for residential purposes by the Ardinghelli family, the owners of the surronding lands. In the 15th century the villa became the hospital of Santa Fina.
DESCRIPTION: most of the external walls were part of the ancient castle, all made of not-aligned squared stones on which the other walls of the rural buildings lean, all arranged around the villa.

LOCATION: at the end of a group of houses which today constitute the little town of Montauto which was located on the ancient “hilltop” Francigena and which today is a local link road with a deviation to the left, leading to a more important road which leads from San Gimignano to Volterra, passing trough Castelsangimignano.
HISTORICAL SIGNIFICANCE: the castle of Montagutolo (or Montauto), known since the 10th century, must have included a church dedicated to San Lorenzo which was specifically mentioned in a measure by Pope Alessandro III, issued in 1171.
Both the castle and the church were destroyed in the first half of 13th century. The church was rebuilt and assumed a certain importance and was elevated to a Provost residence in 1784. It was rebuilt again in 1892 with the addition of a bell tower.
DESCRIPTION: the rectangular building without apse was built with stones and bricks. Over the entrance door, on the facade on the eastern side of the building, there is a niche, in the past was located on the western side, where now we find a buttress. The bell tower is on the right of the church and shows signs of recent restoration.