Poggibonsi is an Italian Comune (Municipality), in the Province of Siena and in the Region Tuscany, it is part of valley of Elsa river. Located about 25 kilometres (16 miles), North of Siena. It is the main centre of the Valdelsa valley. The area around Poggibonsi was already in the Neolithic age, although the first traces of civilisation dates from Etruscan-Roman age, attested by a series of necropolises and by place names such as “Talciona” or “Marturi” (from the Etruscan name of Mars). Main sights: the Palazzo Pretorio (late 13th century), with the annexed Torre del Podestà; the church of Saint Lorenzo, built by the Augustinian order in Gothic-Romanesque style; Santuario of Romituzzo, an ancient building which houses the venerated image of the Madonna of the Snow.
Source: Wikipedia LOCATION: a short distance from the town, in a wide valley known as “Vallepiatta”, on a deviation on the left of the local road which goes from Poggibonsi to the Basilica of Saint Lucchese.
HISTORICAL SIGNIFICANCE: the construction of the Fonte delle Fate (Fairy Spring), dates back to the XIII century and was designed by the architect Balugano da Crema, prior to the destruction of Poggio Bonizio in 1270.
The “Fonte” continued to be used until the XV century when it was buried following the building of the fortress of Poggio Imperiale. The Fonte was restored and used again at the beginning of the XIX century.
DESCRIPTION: the Fonte delle Fate is majestic and consists of a series of tall pilasters in stone which support six pointed arches.
Behind is a gallery of two hundred meters, excavated out of the rock face of the hill, as well as a series of secondary galleries which gather the water of an underground spring. 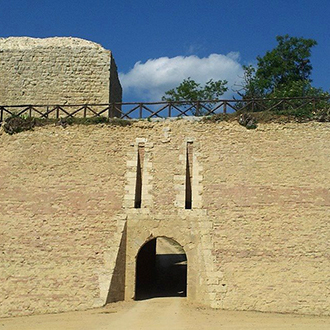 LOCATION: on the summit of a hill in a dominant and strategic position, in the immediate vicinity of the town.
HISTORICAL SIGNIFICANCE: Poggio Imperiale was built where, in the XII century, a settlement existed known as “Podium Bonitii” or Poggio Bonizio, which had grown into a sizeable village and, for that reason, was destroyed by Florence in 1270.
In 1313 the Emperor, Enrico VII, was at war with Florence and set up camp among the ruins of Poggio Bonizio. He wished to rebuild the town but was unable to do so because he was forced to leave the Valdelsa. Later Lorenzo the Magnificent intended to re-construct Monte Imperiale and then Poggio Imperiale.
Giuliano da Sangallo prepared the initial designs, and later by Antonio da Sangallo, but the work was interrupted in 1539 at the behest of Cosimo de’ Medici. In 1991 the work of archaeological research was undertaken which unearthed this ancient heritage.
DESCRIPTION: the surrounding wall with four gates, the Giglio, della Fonte, Saint Francesco and the Calcinaia, as well as a fifth gate known as “soccorso” (help), are well preserved. The South-East fortress or citadel, in the form of a rectangle, has four bastions at the top and a fifth positioned on one of the short sides. 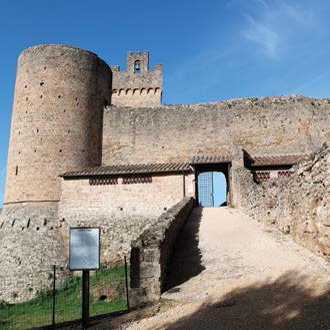 LOCATION: in a dominant and elevated position in relation to the surrounding town of Staggia, near the State Highway N. 2, Via Cassia, on the stretch from Poggibonsi to Siena.
HISTORICAL SIGNIFICANCE: the Castello di Staggia existed in 953 when the then King of Italy, Berengario II, assigned it to his loyal subject Ildebrando dei Lambardi. However, during the XII century it belonged to the Abbey of Isola who entrusted it to the Soarzi or Cattani family.
At the end of the Xlll century it began to deteriorate and was purchased by Albizzo dei Franzesi who restored in the French style. In the fifteen hundreds, after the conquest of Siena by Florence, the Castle of Staggia became the property of the Podestà of Poggibonsi.
DESCRIPTION: the Castle, protected by a surrounding wall is crowned by a massive tower which has two cylindrical towers on either side in the French style which were added by the Albizzo dei Franzesi family in XIII century. 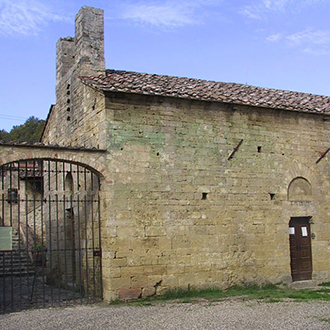 LOCATION: on the side of the river Staggia, along the medieval pilgrim road known as via Francigena, on the site of tha ancient Bridge of Bonizzo.
HISTORICAL SIGNIFICANCE: it was founded perhaps by the Knight‐Templars as a rest place for pilgrims and wayfarers. The first documents date back to 1140, when it is mentioned in a deed of gift and it’s given by Gottifredo di Arnolfo and Arnolfino di Cristofano to Rodolfo, the Abbot of Marturi.
DESCRIPTION: a stone wall surrounds the Magione and the church of Saint Giovanni Battista. 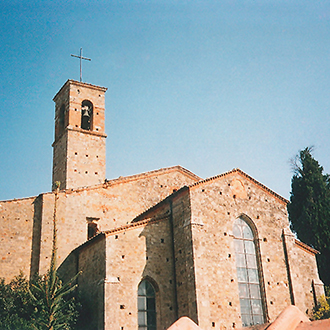 LOCATION: in a dominant isolated position not far from the historic centre of Poggibonsi and near the Fonte delle Fate and the Poggio Imperiale, right on the road to Colle di Val d'Elsa and Staggia Senese..
HISTORICAL SIGNIFICANCE: the convent attached to the Franciscan basilica was built in the first half of XIII century in the area called Camaldo where one finds the ancient church of Saint Maria, however, the Basilica was dedicated in 1252 to Saint Lucchese, the patron saint of Poggibonsi, a follower of Saint Francis.
The whole complex was seriously damaged during the World War two, but the subsequent restoration has restored its ancient splendor.
DESCRIPTION: the basilica, an example of conventual architecture, in the form of a latin cross, has two chapels which lengthen the transept. The works of the following artists can be seen: Raffaellino del Garbo, Giovanni della Robbia, Bartolo di Fredi, Cennino Cennini and Taddeo Gaddi. 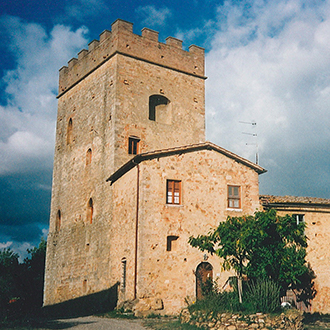 LOCATION: in a dominant position at the top of a hill which can be reached by proceeding along a deviation on the left of the local road that goes from Poggibonsi to Talciona and beyond.
HISTORICAL SIGNIFICANCE: the tower was part of the castle which existed in the X century, ceded to the Abbey Fiorentina by the Ugo, Marquis Tuscany, who was then the owner. In the XII century, the castle was turned into an agricultural centre along with the lookout tower, which probably served the castle of Strozzavolpe.
In the eighteen hundreds the tower of Luco was restored and only the lower portion has remained untouched.
DESCRIPTION: a stone tower, crowned with guelph crenellations, with changes to the upper part, has sizeable window openings and finished in brick.