Montaione is an Italian town near Florence in Tuscany, it is part of the valley of Elsa river. Located about 35 kilometres (22 miles), southwest of Florence. The castles of Iano, Camporena, Vignale, Collegalli, Figline (or Filicaja), Barbialla, Castelfalfi, Tonda, Sughera, Scopeto are part of this town. The “frazione” Filicaja is known as the starting point of “Antonio da Filicaja” for the invasion of Pisa by the Fiorentine army, in 1509. Also the “Italian Horse Protection Association” (IHP), has its main base in Montaione Frazione Filicaja: Main Sights in Montaione are the church of “San Regolo” where we can find the “Madonna del Buonconsiglio” by the painter “Guido di Graziano” (late 13th century).
Source: Wikipedia 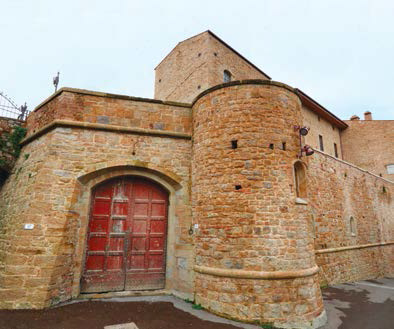 LOCATION: on the western perimeter of a residential-hotel area, known as the Village of Castelfalfi, on the road which goes from San Gimignano, passing through Camporbiano, Il Castagno d'Elsa and San Vivaldo.
HISTORICAL SIGNIFICANCE: the site on which Castelfalfi now stands was a Byzantine fortification which, in the 6th century, was given to the Longobards, who altered and enlarged it and at the same time named it Castelfalfi in honour of a legendary character. Later the castle belonged to the Gherardesca family and then a certain Ranieri in 1139 ceded it to the Bishop of Volterra.
In 1230 it became subjected to the jurisdiction of San Miniato but it kept a certain autonomy and was allowed to become a free Comune in 1312. Later It successfully attacked the troops of the Emperor Henry 7th. In 1554, Castelfalfi was seriously damaged by the men of Piero Strozzi, then it was completely rebuilt and changed into a villa for the Biondi family, who, in the eighteen hundreds created a flourishing wine producing farming estate.
DESCRIPTION: an imposing complex made entirely of stone, consisting of a main central core and two lateral towers. At the base of the building there is a surrounding wall with semi-circular bastions. On its eastern side, there is the Village of Castelfalfi. 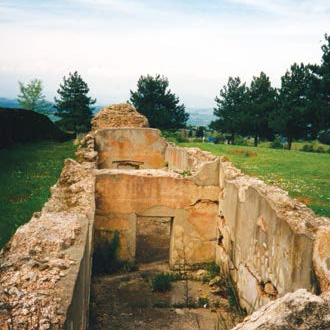 LOCATION: on the left side of the road which goes from San Gimignano to Montaione, passing through Camporbiano, Il Castagno d'Elsa and Boscotondo, before villa da Filicaja, which is on the right side of that road.
HISTORICAL SIGNIFICANCE: this is an area which has been inhabited since the Etruscan period and there was built a cistern, probably in the third century, composed of three linked basins or ponds, in order to collect water of several springs which exist near Poggio all’Aglione. The water was used by the owners of a large Roman villa located immediately in the north side of the area, which continued to work probably while the villa was in use. Then it was probably demolished in order to use its materials for the construction of other buildings.
DESCRIPTION: the cistern, which is made of three rectangular basins linked together with cemented material, has a total capacity of 200,000 liters of water. The basins, each perfectly plastered internally, were at one time covered by barrel vaulted roofs, no longer in existence.
Abandoned for centuries and left to decay, so much so that the cistern was named “Il Muraccio”, but the basins have been carefully restored in an appropriate environment to keep their archaeological value. 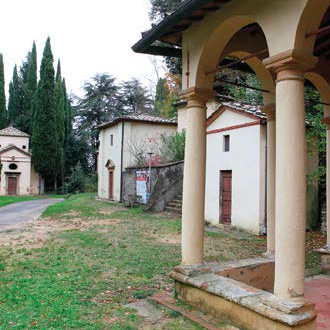 LOCATION: in the middle of a forest and a deviation on the left of the road which leads from Montaione to San Gimignano, passing through Il Castagno d'Elsa and Camporbiano.
HISTORICAL SIGNIFICANCE: built during the beginning of the fifteen hundreds, the 34 “Chapels of the Sacred Mountain” or “Jerusalem in Tuscany”, were consecrated in 1515, but over the years were reduced in number.
DESCRIPTION: today 17 chapels contain terracotta works of the Robbia School (Giovanni della Robbia and Benedetto Buglioni), which represent episodes of the life of Christ, with a particular reference to his last years and the way to calvary. 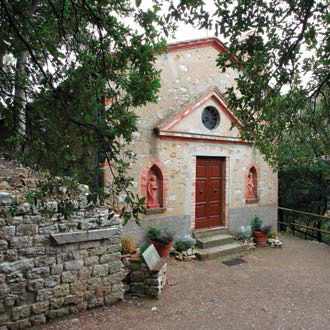 LOCATION: set among the ruins of the Castello della Pietrina on the left of a local road which leads from Montaione to Palagio, passing through Iano.
HISTORICAL SIGNIFICANCE: the first records of the existence of a small church dedicated to the Saints Andrea and Agata, as part of the castle of Pietrina, date back to 1234.
After its conversion into a sanctuary, this religious building slowly fell into disuse, until the restore in the 19th century and again in the 20th.
DESCRIPTION: only the facade, almost completely covered by plaster, is visible.
The base of the structure is made of stone and brick and at the centre, above the entrance door and the architrave, there is a rose window with two lateral side windows and a tower with a bell gable above. 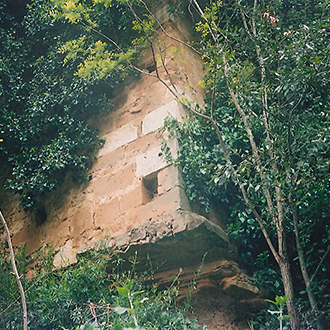 LOCATION: in an isolated position on a deviation of the road that goes from Montaione to Iano passing through San Vivaldo.
HISTORICAL SIGNIFICANCE: the first document that confirms the existence of the castle of Vignale, is a grant given by the Emperor Barbarossa Federico I, in 1161 for unclear reasons. A second document was issued in 1186 by the Empereor Enrico VI and deals with a donation of a half of the castle of Vignale to the Bishop of Volterra. Other documents are dated 1209, 1240, 1338 and 1426. Then there was a period of deterioration ending with the birth of a new settlement known as Vignale Nuovo. In any case Vignale Vecchio survived till the end of 20th century, after which it was completely abandoned.
DESCRIPTION: the relics of this ancient village-castle consist of crumbling walls made of stone and brick, with traces of windows and leaning walls.

LOCATION: in an isolated position near the small urban centre of Castelfalfi on the road which goes from San Gimignano passing through Camporbiano and Il Castagno d'Elsa to San Vivaldo.
HISTORICAL SIGNIFICANCE: the church was built at the beginning of the fifteen hundreds over a building used for religious purposed which was destroyed during a war.
The new construction, similar to its predecessor withe the reuse of its materials, included a loggia which was demolished in the 20th century, because it was in contrast with the medieval architectural design of the building.
DESCRIPTION: the building looks medieval and it was built with cut squared stone. The enriched, attractive entrance door in the simple facade precedes a wide stairway. On the right there is a substantial bell tower.